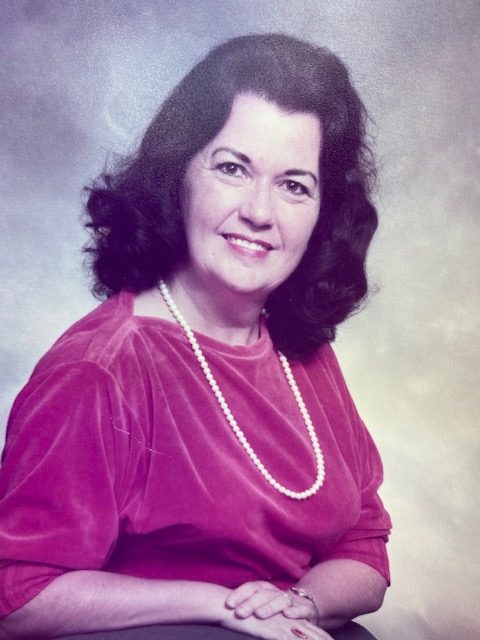 Mrs. Martha LeGrand Kabler Stewart entered into rest on August 14, 2020. She was preceded in death by Warren W. Stewart her husband of 69 years. She is also survived by a son, Warren Weir Stewart, Jr. of Hephzibah, Georgia;  a daughter, Nancy Stewart Emory (husband, Phil) from Tybee Island, Georgia;  two grandchildren, Phillip Ryan Emory (Melanie) of Macon, Georgia and Laurie Emory Burrell (Trey) of Central, South Carolina; and three great grandchildren, Allie Grace Emory and Bella Faith Emory from Macon and Hank Edwin Burrell of Central. She is predeceased by her father, Fred Kabler and mother Rachel Carwile Kabler.
A native of Rustburg, Virginia, Mrs. Stewart and her husband met at Lynchburg College.  She has lived in Augusta with her husband since 1951. She decided to return to school and received a BA degree in English from Augusta College and a MST from Georgia Southern University.  For thirty six years, Martha taught English and Literature for the Richmond County School System to include Lucy Laney High School, later Aquinas High School and Georgia Military College.
Mrs. Stewart was a member of Saint Paul’s Episcopal Church where she sang in the choir.  She was the first woman president of the Augusta Choral Society, a charter member of the Augusta Opera Association and a member of the Augusta Players.  She loved to make and give away photographic histories of family, friends, churches, schools and pets.
A private grave-side service for Martha and her late husband, Warren W. Stewart will be held at Saint Paul’s Episcopal church with committal in the church yard.  The Rev. John Jenkins will officiate.
Memorials may be made to the Choir Fund at Saint Paul’s Episcopal Church and to the Augusta Humane Society.

Offer Condolence for the family of Martha LeGrand Kabler Stewart

Funeral and cremation costs can be very confusing. All our prices are clearly disclosed on our general price list and website. END_OF_DOCUMENT_TOKEN_TO_BE_REPLACED

100% Service Guarantee Central Savannah River Crematory is committed to service beyond expectation before, during and END_OF_DOCUMENT_TOKEN_TO_BE_REPLACED