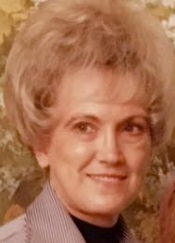 Jeanette Thompson (born Clara Jeanette Simmons) passed away on the night of Oct. 5, 2020, in Warrenton, Ga., after a long battle with dementia. She was 88.

Ms. Thompson was born in Athens, Ga., and spent most of her life in the Classic City. She was retired from Southern Bell and the University of Georgia, where she worked as a telephone operator.

In her younger years, Ms. Thompson enjoyed sloe gin fizzes and trips to Daytona Beach, Fla. She had a lifelong love of animals and reading, which she passed on to her family. But her happiest moments were spent in Target and T. J. Maxx.

Ms. Thompson raised her daughter, Crystal E. Nunnally, largely on her own. They raised Ms. Nunnally’s son, Joshua A. Eaton, together.

Even after she began to decline, Ms. Thompson remained the family’s matriarch. Her grandson once tried to insist that she take the front seat of the car instead of ceding it to him.

“I want you to know something,” she shot back. “I don’t have no bosses.”

On the back of Ms. Thompson’s UGA staff ID, she had taped a quote: “Every woman needs four animals in her life: a jaguar in her garage, a tiger in her bed, a mink in her closet and a jackass to pay for it all.”

The family would like to thank the staff at Warrenton Health and Rehabilitation and Alliance Hospice for the loving care they gave Ms. Thompson, especially in her final hours.

Funeral services will be held in Athens after the pandemic.

In lieu of flowers, please make a donation to the Alzheimer’s Association.

Offer Condolence for the family of Jeanette Thompson

Funeral and cremation costs can be very confusing. All our prices are clearly disclosed on our general price list and website. END_OF_DOCUMENT_TOKEN_TO_BE_REPLACED

100% Service Guarantee Central Savannah River Crematory is committed to service beyond expectation before, during and END_OF_DOCUMENT_TOKEN_TO_BE_REPLACED